Last night Universal TV (which I guess is a new station) played the original Star Wars movie. I’ve seen this movie around 50 times, so I was surprised when I seemed to ‘discover’ new things in the production this time around.
This is about as non-SEM as you can get, but here are a few of things I noticed:
1. If Luke is staying with his uncle . . . When we first meet Luke Skywalker, he’s living on a farm with his uncle. As we later find out, Luke’s father is Darth Vader, so doesn’t that mean that either a) Luke’s uncle is Darth Vader’s brother or b) Luke’s aunt is Darth Vader’s sister? Either way, I gotta believe that being a farmer (farming sand as far as I can tell) is sort of like being Roger Clinton compared to Bill Clinton when your sibling is Darth Vader.
2. Why does jumping in the garbage disposal work? Luke, Han, Chewie and Leia are seemingly trapped by stormtroopers on the Death Star when Leia blasts a hole in the wall and they all jump into a pile of garbage. As dumb as stormtroopers seem to be, one would think that they might be smart enough to notice the giant smoldering hole in the wall and deduce that our heroes are somewhere in the vicinity.
3. What’s up with Obi-Wan talking to Darth Vader on a first name basis? In the epic lightsaber fight between Darth Vader and Obi-Wan, Obi-Wan address Darth Vader as “Darth.” For example: “You can’t win, Darth. If you strike me down, I shall become more powerful than you can possibly imagine.” You would think that Obi-Wan would use either “Anakin” – since this is how he grew up knowing Darth Vader, or the full name – Darth Vader. But to call him the colloquial “Darth” seems too friendly to me.
[youtube=http://www.youtube.com/watch?v=rjCyZ2P9bCA&hl=en&fs=1]
4. General Dodonna and Mick Fleetwood – separated at birth? Compare the General leading the war room during the final battle with Fleetwood Mac drummer Mick Fleetwood – you gotta admit that they look pretty familiar . . .

5. Nazi victory party? And finally, this is not a new observation, but it’s been pointed out to me that the final victory scene of Star Wars is a direct ripoff of Leni Refinstahl’s Nazi propaganda film, The Triumph of the Will. I don’t think there’s any hidden pro-Nazi subtext here (and indeed, the evil Empire soldiers are called Stormtroopers, no doubt a reference to Nazi soldiers), I think George Lucas was just impressed by the grandeur of the film. 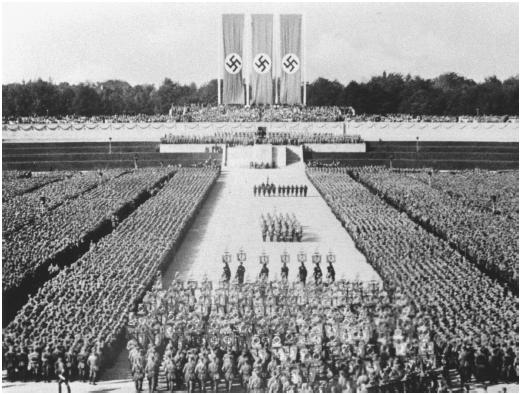 Happy 4th of July to all, and to all a good night!